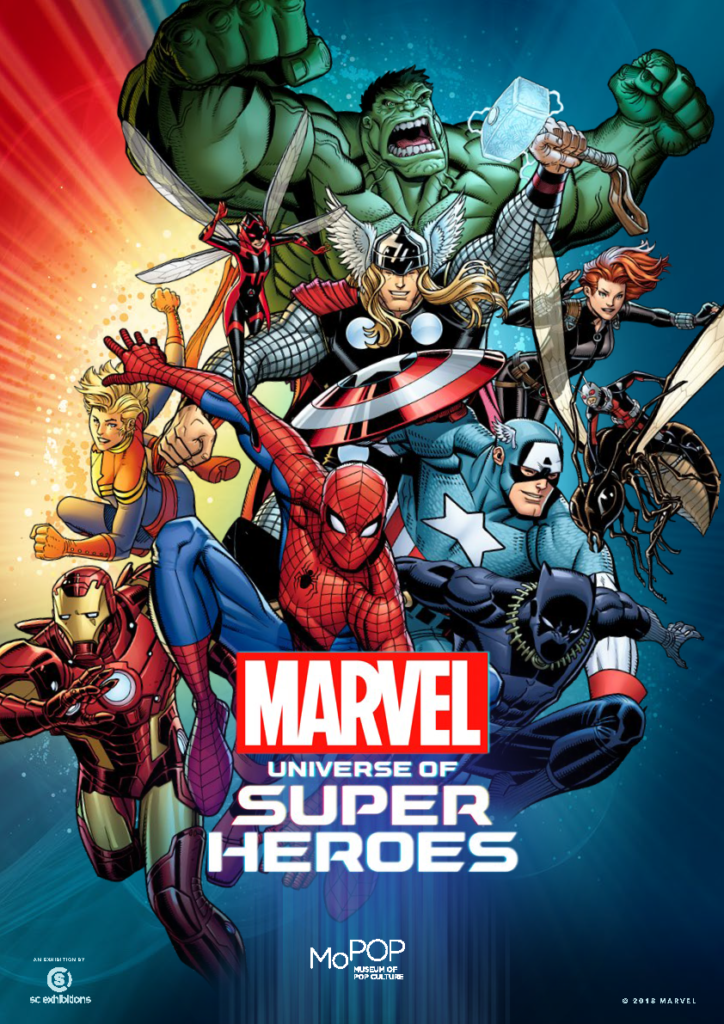 Organized by the Museum of Pop Culture, SC Exhibitions, and Marvel Entertainment, MARVEL: Universe of Super Heroes features more than 300 original artifacts, including some of Marvel’s most iconic and sought-after pages, costumes, and props, many of which have never-before been seen by the public. The exhibition chronicles nearly eight decades of Marvel Entertainment and celebrates the 10th anniversary of Marvel Studios by tracing Marvel’s story and its influence on visual culture — including how it’s responded to historical events and addressed broader issues such as gender, race, and mental illness—as well as uncovering the narratives of individual characters such as Captain America, Spider-Man, Black Panther, and Doctor Strange. Immersive set pieces bring the comic book world to life, and the exhibition is accompanied by an immersive soundscape created by acclaimed composers Lorne Balfe and Hans Zimmer.

“Marvel transformed the idea of the Super Hero in the 1960s—and beyond—by ratcheting up the visual spectacle, emotional dynamism and philosophical sophistication of the action-adventure comics genre,” says Brian Crosby, Creative Director of Marvel Themed Entertainment. “Marvel has always been a reflection of the world outside your window, and one of its most compelling messages has always been, that anyone—regardless of race, religion or gender—can be a Super Hero.” 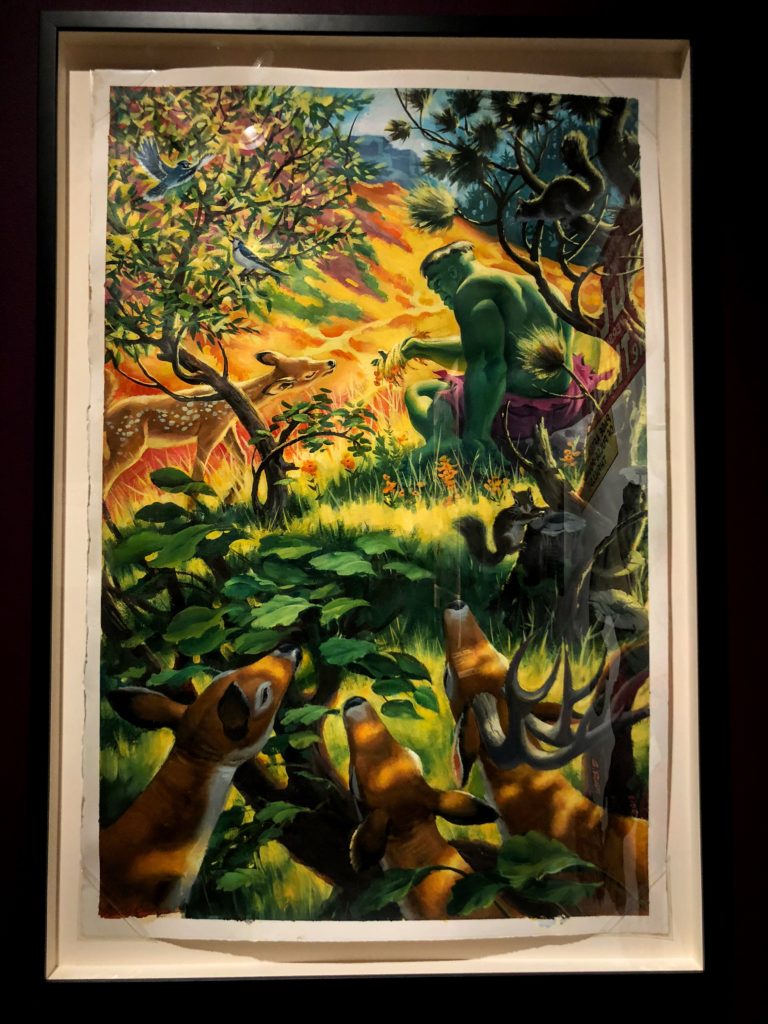 The curators spoke at length with artist Steve Rude about possible ideas for this piece. Mr. Rude surprised us, recalling several stories that emphasized the Hulk’s love of nature and animals—he captured the man-moster’s gentler side in this memorable image. 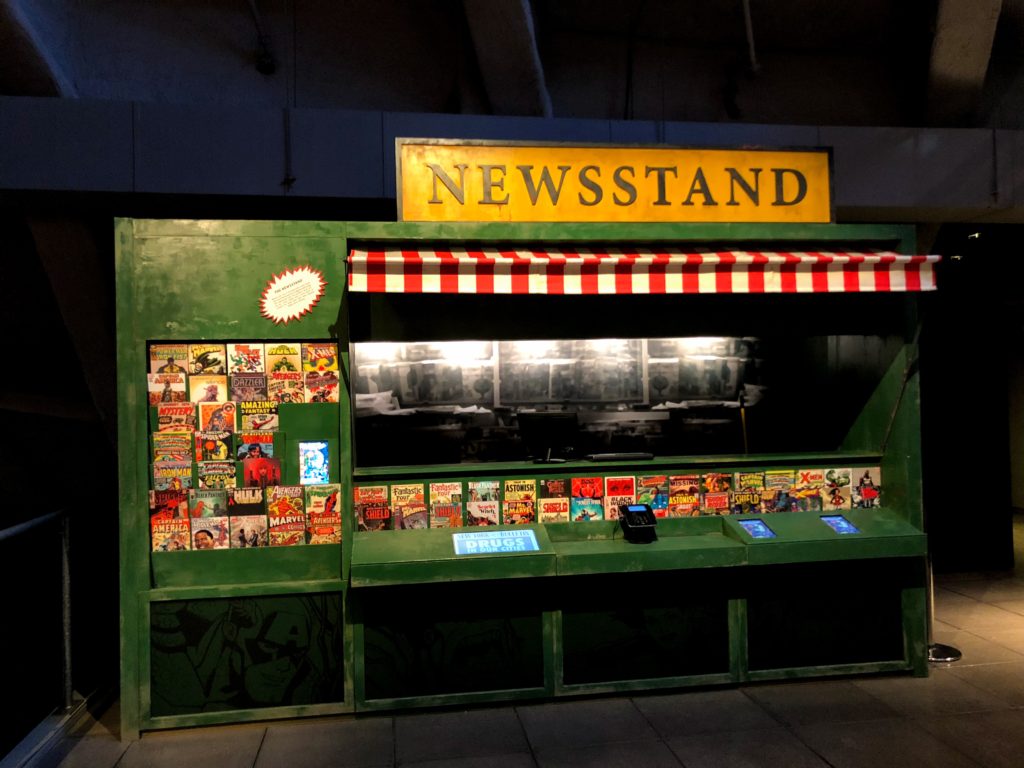 The visitor is taken on an adventurous journey through the 80-year history of Marvel. The exhibit is brought to life through numerous walk-in scenes, borrowed straight from the comic world. It all begins with a leap back in time, to a New York City-style street scene of the 1940s, housing a classic newsstand – the key venue that paved the path to success for Marvel’s comic books. 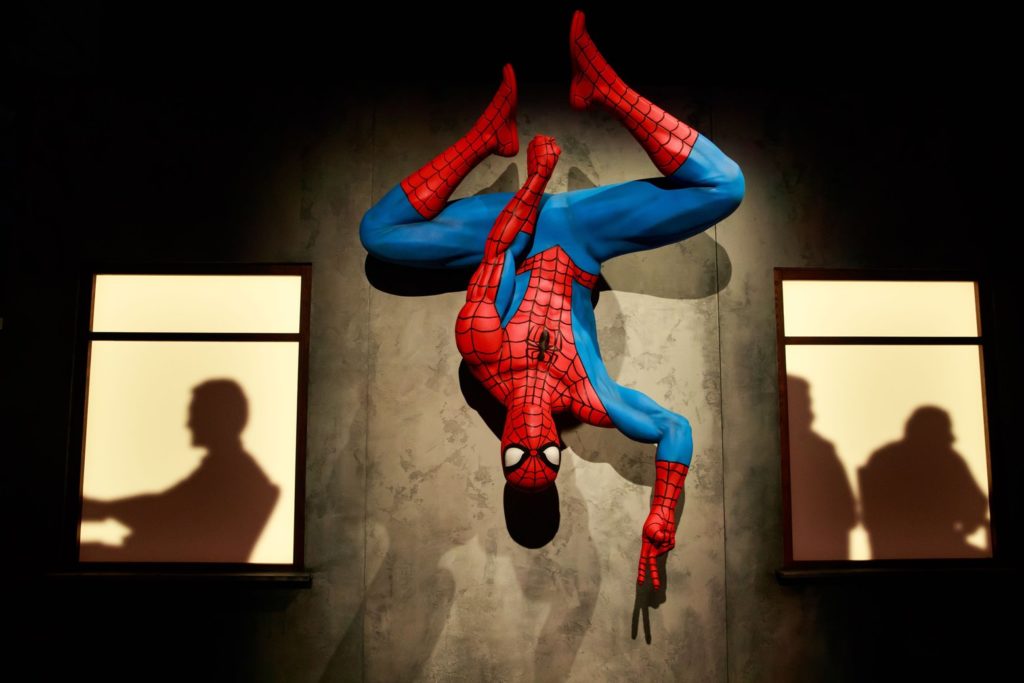 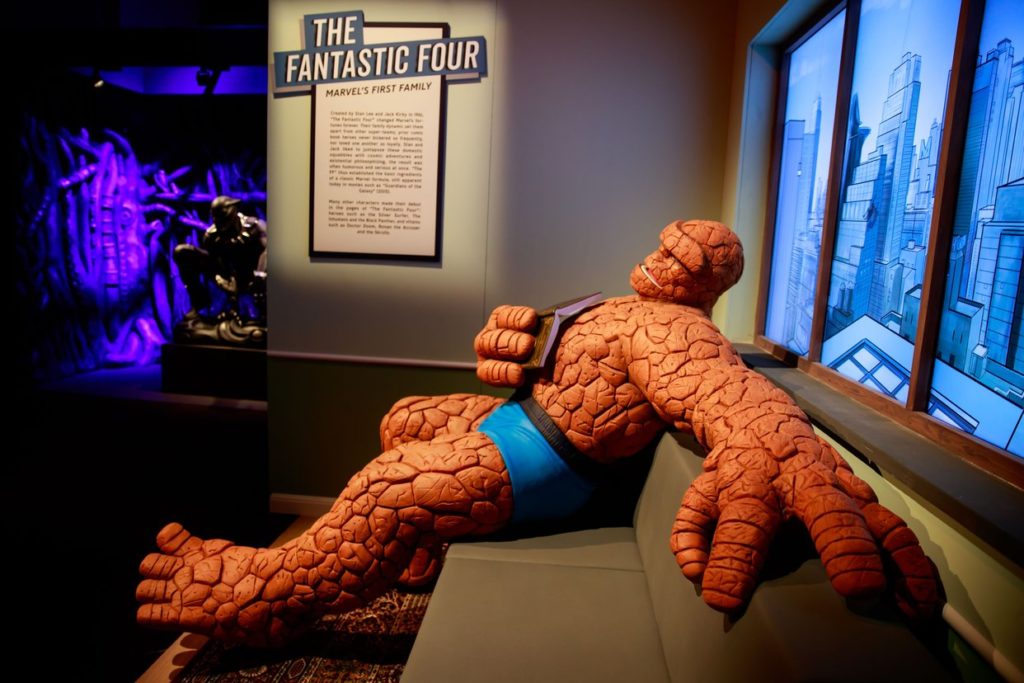 Lively Marvel statues invite visitors to interact and become part of the scenery, with great photo opportunities for sharing on social media. 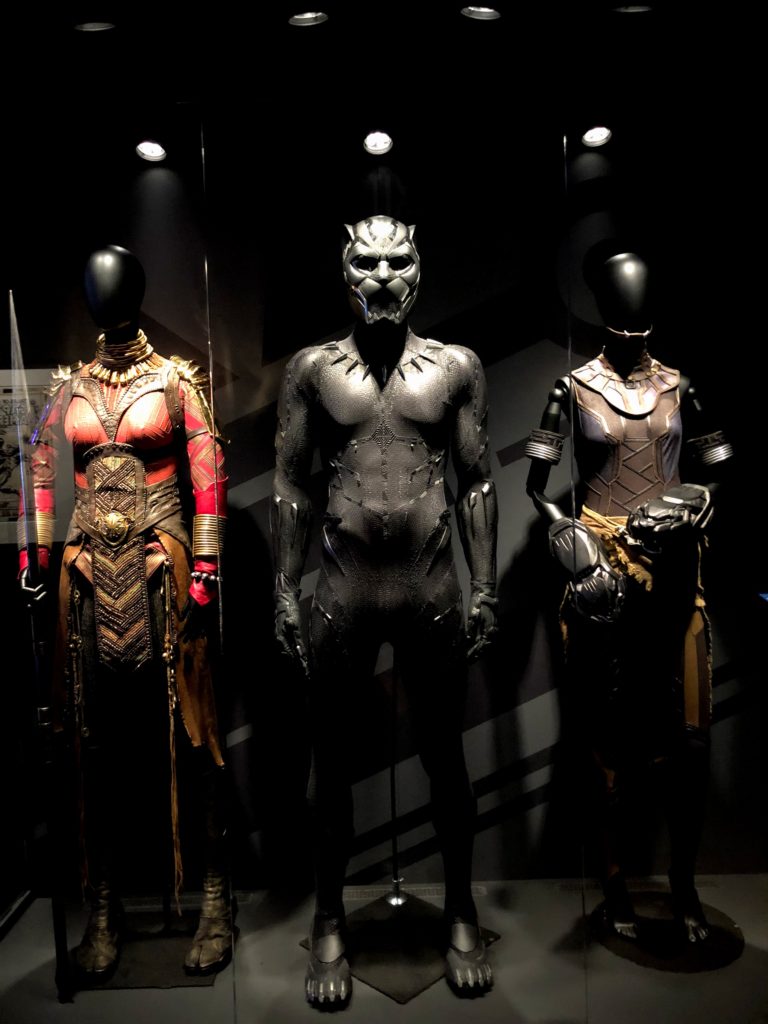 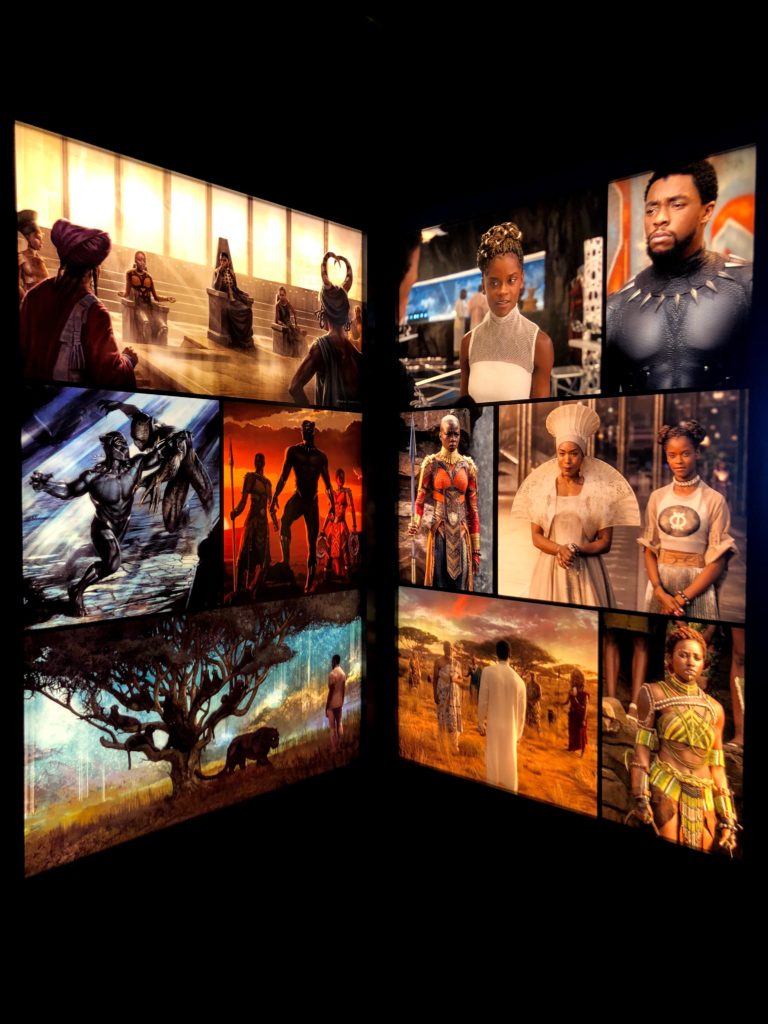 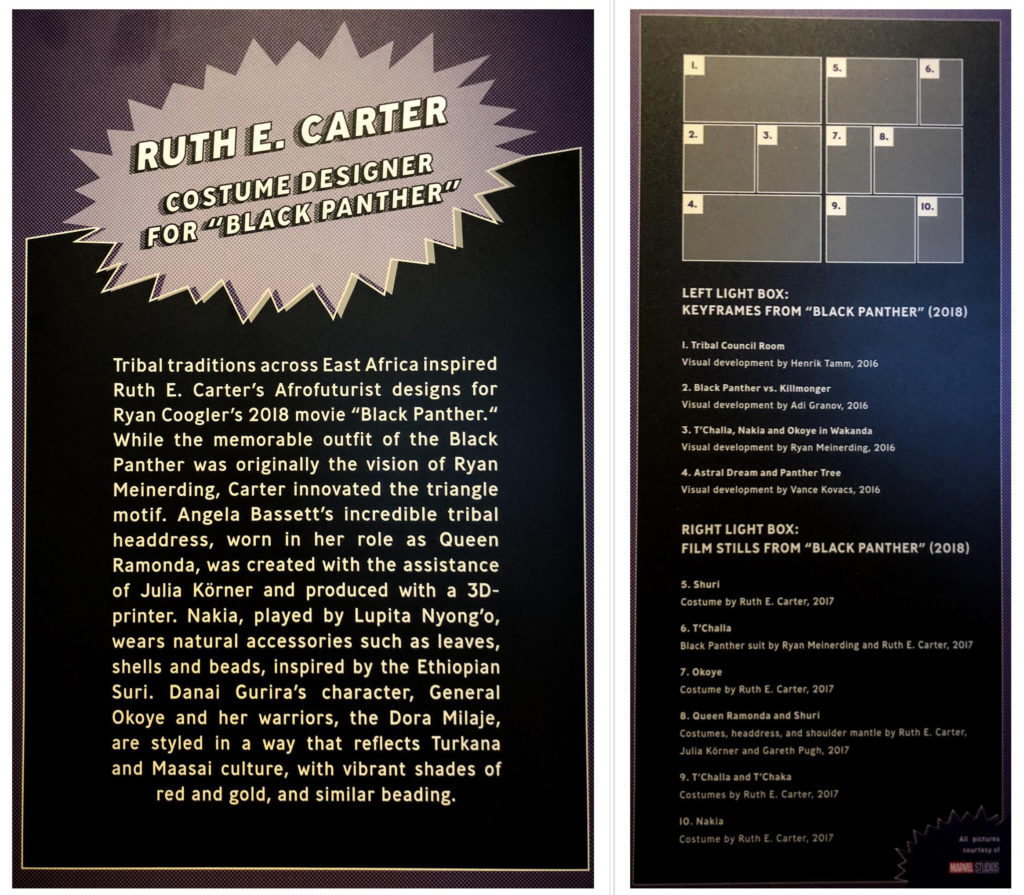 Ruth E. Carter has a reputation for incorporating African-American tradition and culture into her Afrofuturistic designs. Carter carried out extensive research for Ryan Coogler’s 2018 film Black Panther, studying the artistry in the original comics as well as making use of a “visual bible” designed by her colleague Hannah Beachler, the film’s production designer. However, Carter could draw on the things she had seen in her research for Amistad (1997), her own visits to Africa and authentic African items that she discovered in flea markets and antique shops across the United States. She also claims to be influenced by “African Ceremonies,” a photo collection by Carol Beckwith and Angela Fisher.

In an office setting, visitors can seek little Ant-Man (nearly a walking dot) in his suit running around between the office items. A series of actions unfold.

The exhibition is curated by an outstanding team that includes three scholars of comics – Benjamin Saunders, Matthew J. Smith, and Randy Duncan, all of whom are university professors and experts in their field. MoPOP curators Brooks Peck and Jacob McMurray, as well as renowned comics writers and editors Ann Nocenti and Danny Fingeroth, have also contributed.

About The Museum of Pop Culture (MoPOP)

MoPOP is a cutting-edge, nonprofit museum dedicated to the ideas and risk-taking that fuel contemporary popular culture. With its roots in rock ‘n’ roll, MoPOP serves as a gateway museum, reaching multi-generational audiences through collections, exhibitions, and educational programs, and using interactive technologies to engage and empower its visitors. At MoPOP, artists, audiences, and ideas converge, bringing understanding, interpretation and scholarship to the popular culture of our time. MoPOP is housed in a 140,000 square foot Frank Gehry-designed building. This spectacular, prominently visible structure has the presence of a monumental sculpture set amid the backdrop of the Seattle Center.

SC Exhibitions creates exhibitions which travel worldwide and hosts international exhibitions in Germany, Austria, and German-speaking Switzerland. SC Exhibitions is a division of Semmel Concerts, the large German live entertainment producer. Since SC Exhibitions started touring its exhibitions TUTANKHAMUN – HIS TOMB AND HIS TREASURES; THE DISCOVERY OF KING TUT; and recently MAGIC CITY – THE ART OF THE STREET, they have reached an audience of more than seven million people worldwide, and built a strong international network within museums, science centers, cultural venues and the creative industries. The network is the basis for the biennial Touring Exhibitions Meeting, the world’s only conference entirely dedicated to touring exhibitions.

Atlantic Canadian artist Nick Bradshaw created the poster artwork for the exhibition. Starring a cast of well-known comic book characters – including Black Panther, Captain Marvel, and Spider-Man – the poster is a taste of what to expect from the exhibition, which delves into some of Marvel’s most beloved stories, from the page to the screen. Bradshaw has worked with some of the most prominent comic book publishers in the business – including Marvel, DC, Dynamic Forces and IDW. His work has appeared in titles including “X-Men,” “Spider-Man” and “Guardians of the Galaxy,” and over the course of his 16-year career he’s been involved in the fields of animation and video games, as well as comics.

Marvel Entertainment, LLC, a wholly-owned subsidiary of The Walt Disney Company, is one of the world’s most prominent character-based entertainment companies, built on a proven library of more than 8,000 characters featured in a variety of media over 78 years. Marvel utilizes its character franchises in entertainment, licensing and publishing.