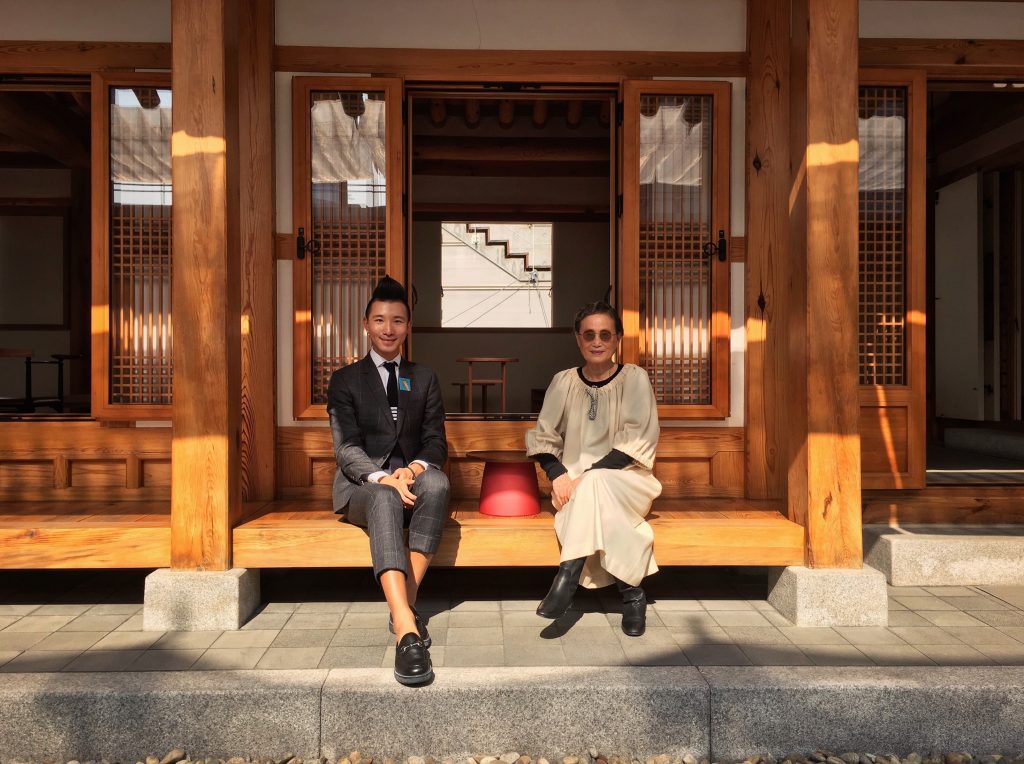 Discover the past, present, and future of Korea in this first U.S. exhibition to consider Korean fashion as an expression of social and cultural values. 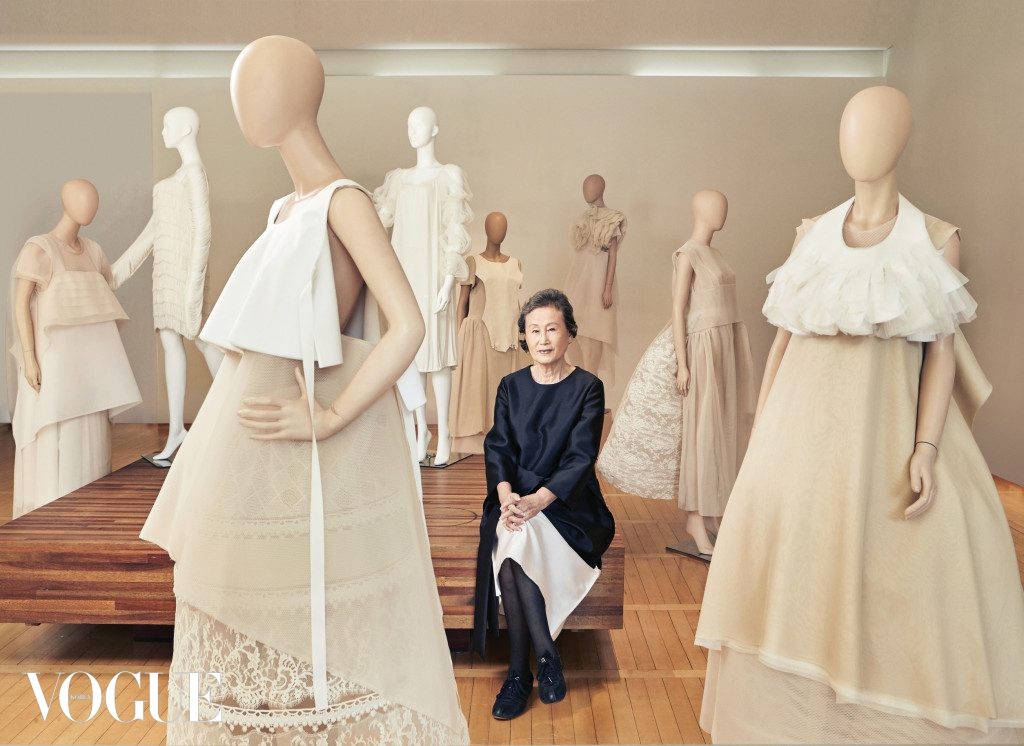 Designer Jin Teok discusses her career, the work on view in Couture Korea and her most recent collection in this afternoon conversation with fashion historian Neil Wu-Gibbs. Jin is internationally renowned as the pioneer of contemporary Korean haute couture. Her work has been included in museum exhibitions in London, Paris, and Seoul.

Contemporary Korean fashion places great emphasis on the use of traditional dress and design alongside the application of modern techniques. These can include different styling methods, the introduction of new and inventive colors, creative weaving and dyeing techniques and innovative manufacturing processes to give the designs that distinct and unique edge. Korea’s most respected fashion designer Jin Teok is celebrating her 52nd year of success this year which dates back to the introduction of her womenswear collection known as “Francoise” in 1965. The trademark Jin style includes her modest yet exquisite cuts inspired by Korean culture along with artistically designed details which may consist of more flamboyant wrapping, scrunching or pleating.

Her career took off in 1988 when she was commissioned to design the uniforms for the national team of South Korea in the Olympics. She was also assigned to create the uniforms for the flight attendants of the Asiana Airlines in the same year. 1990 then saw the creation of the Seoul Fashion Artists Association of which she was the president for five years. Following this, Phaidon also selected her for one of their publications about 20th Century fashion designers in 1998, the only Korean designer ever to have been chosen by this British publisher. Shortly after this, she was invited by the Chambre Syndicale to take part in the esteemed Prêt-à-Porter semi-annual international fashion show in Paris in 1993.

Similarly to Gabrielle “Coco” Chanel who is known for her “little black dress,” Jin is renowned for her “white shirt” designs which have come to be seen as her signature pieces. As a child, Jin lived in Wonsan which is now part of North Korea, and it was here that she bore witness to the Korean War (1950-53). As a result of this, her family fled to the safety of Jeju Island in the South when she was just 16 where they lived in a small mud hut. One day, she noticed her brother’s white shirt drying above a window covered with traditional Korean styled paper, she said that she found the shirt hanging there to be so beautiful and mesmerizing that in her words; “was alluring, the way my brother’s shirt shined against the sunlight permeating the Changhoji.” She then went on to add that the image has stayed with her ever since, something about its delicacy and transparency along with the “crisp sound it might make when folded.” For her, this was a significant moment, one that ignited her desire to create garments and make it elegant and translucent while at the same time being able to absorb light which she thought was very beautiful indeed. This moment led to her career in fashion design, and the white shirt theme has been prevalent in many of her collections ever since.

Jin is now a world-renowned designer, and many of her works have been published in numerous art books and shown at many exhibitions. These include the co-operative publication known as Beyond Nature in 2005 and the highly acclaimed exhibit Korea now! Craft, Design, Fashion and Graphic Design at the Musée des Arts Décoratifs in Paris in 2015 and hosted by the France-Korean Committee. She has also frequently collaborated with Arumjigi Culture Keepers Foundation to preserve and promote Korean cultural heritage. Possibly the most significant exhibition of all, however, was the Anthology: Jin Teok, Creation of 50 Years, hosted throughout the 2015 Seoul Fashion Week at the Dongdaemun Design Plaza in Seoul. Suzy Menkes, the international editor of Vogue at that time said that “Jin Teok’s clothes are like a poem. They speak from her soul, sometimes as a whisper, occasionally with a shout, always with grace… In this culture of MORE! – more sound, more color, more fashion, more relentless noise – Jin Teok has offered us, for half a century, something uniquely precious: the still, small voice of calm.”

Even now at the ripe old age of 84, Jin remains very busy, her latest collections speak of new thoughts, ideas, and inspiration with their emphasis on poetic silhouettes and manipulating fabrics. I was thrilled to have a fruitful conversation with Madam Jin at Arumjigi before this event during my trip to Seoul. She kindly shared many of her personal stories with me. Today, she will share her inspiring stories with all of you! Without further ado, please welcome our guest Jin Teok! 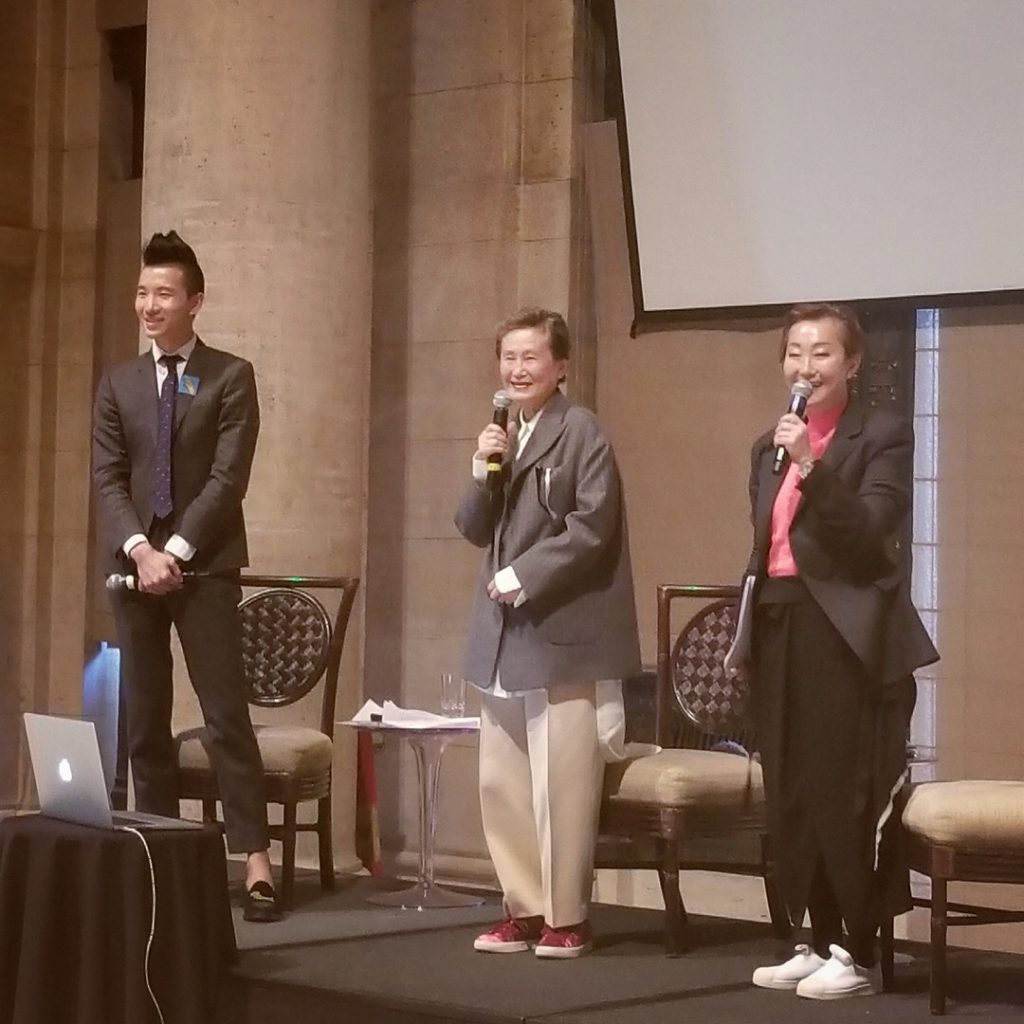 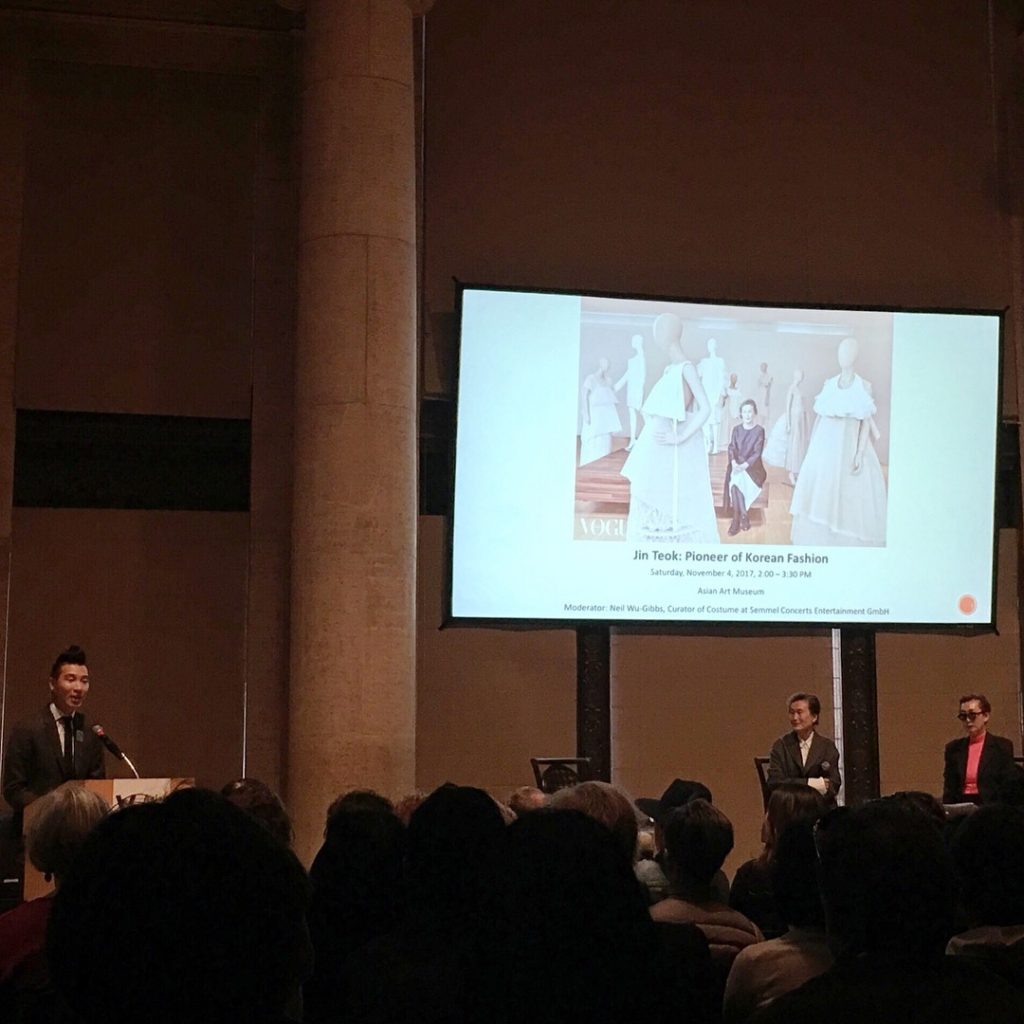 Couture Korea showcases historical Korean fashion and its modern reinterpretations at a moment when young Seoul-based designers are making the leap to the global stage and international haute couture is finding inspiration in Korean art and culture. With more than 120 works, the exhibition considers fashion as an enduring expression of social and cultural values.

Couture Korea opens with an introduction to the exquisite craftsmanship, signature silhouettes and bold aesthetics of clothing from the Joseon dynasty (1392–1910), presented in precise reconstructions based on archival records. Learn how details of design — cut, materials, colors and accessories — communicated moral codes and customs, the wearer’s age and position in society, and the occasion and season for which a garment was crafted.

The second gallery focuses on the work of two contemporary designers who have been inspired by Korean tradition. The high waistlines, flared sleeves and brightly colored patchworks of Karl Lagerfeld’s 2015/16 Cruise Collection for Chanel were influenced by Joseon dynasty fashion and art, such as bojagi wrapping cloths. Also on view are pieces by pioneering Korean designer Jin Teok, lauded by Vogue’s Suzy Menkes as a “fashion magician,” who evokes the spirit of historical Korean dress with an embroidered top from a wedding robe layered over a washed denim skirt.

The final section of the exhibition introduces two younger Seoul-based designers, Im Seonoc and Jung Misun, who are reinterpreting Korean fashion for the twenty-first century.

Beginning with “What Is Hanbok?” (traditional Korean clothing), the exhibition examines history and tradition. Emphasizing mid- to late- Joseon dynasty clothing of the elite class (yangban), the varied and sophisticated hanbok in the Osher Gallery highlight proper ways of dressing for men, women, and children, with garments expressing social status, changing seasons, and special occasions or milestones in life.

The reproductions of hanbok in this gallery are based on wide-ranging research, including recent archaeological discoveries. In some cases, portraits and genre paintings are valuable sources for re-creating clothing of the past. Excavations of Joseon tombs in recent years have revealed many types of costumes that were used to dress the deceased. The conserved garments have served as primary sources for the re-created works throughout this gallery. Artisans at the Arumjigi Culture Keepers Foundation in Seoul employed authentic, historically accurate processes and production methods as well as historically appropriate fabrics for making traditional Joseon-period clothing. This research continues, reconstructing and reinterpreting the hanbok tradition, ushering in a new era of knowledge of fashion history. 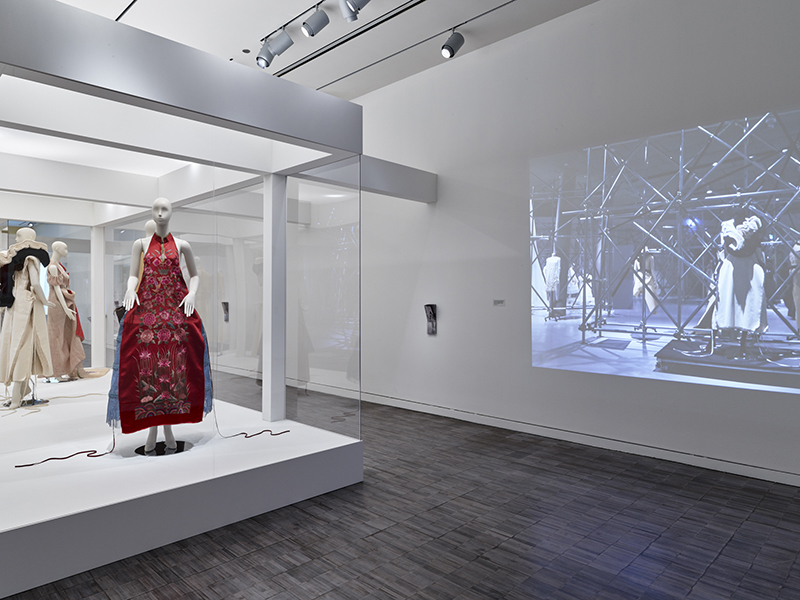 Between East and West

In “Between East and West,” the works in the Hambrecht Gallery transition into the present day, with creations by two senior fashion designers. Jin Teok (b. 1934) and Karl Lagerfeld (b. 1938) have searched for innovative ways to revive Korea’s fashion traditions. Both are celebrated designers of Western couture who have sought out their own distinctive and provocative ways to reinterpret Korean traditions and motifs in a contemporary and global context.

Jin Teok (b. 1934), a fashion pioneer who began her career in the early postwar era in South Korea, is passionate about reinterpreting traditional Korean art and fashion. In this exhibition, five representative designs showcase her creative process in remaking the traditions of the past. Since the 1990s, when she was active in Paris and participated in several international fashion shows, she has conducted extensive research on traditional Korean clothing, motifs, and sensibility to inform her works. At times, Jin includes traditional Korean symbols, subjects, or details from paintings as patterns on her designs, or she incorporates traditional Korean motifs into Western materials, styles, and shapes. In doing so, Jin joins the visual language of the past with contemporary fashion sensibility.

In 2015, the Chanel Cruise collection fashion show at the Dongdaemun Design Plaza in Seoul, South Korea, attracted enormous attention in the fashion world. Since 2000, Karl Lagerfeld (b. 1938), the creative director of Chanel, has presented the Cruise collection in various cities where he gained inspiration. Seoul was the third city he chose in Asia, following Singapore and Dubai. For the 2016 Chanel Cruise collection, Lagerfeld created designs that were influenced by traditional Korean clothing as well as by Korean artworks.

From Seoul to San Francisco

In the Lee Gallery, “From Seoul to San Francisco” explores how Korean designers today are grappling with Korean traditions. The designs of Im Seonoc (b. 1961) and Jung Misun (b. 1984), representing the current generation of Seoul-based designers, showcases the challenges and excitement of reinventing, re-creating, and transforming traditions in contemporary works, producing visually stunning results.

For contemporary Korean designers Im Seonoc (b. 1962) and Jung Misun (b. 1984), reinterpretation of historical fashion is a compelling and seemingly irresistible challenge. These two Seoul-based artists collaborated with the Arumjigi Culture Keepers Foundation for a yearlong study of traditional clothing, seeking ways to adapt and reinterpret traditions for contemporary lifestyles. This gallery documents each designer’s individual and unique process through her own sketches, photographs, material samples, and finished designs.

These two artists take remarkably different approaches in creating new apparel. Im Seonoc searches for elements and trends in contemporary Western attire that she can take and apply to her own interpretation of traditional Korean clothing. For example, Im mixes Western spencer jackets or bolero forms with traditional women’s jackets (jeogori). She keeps the silhouette of the traditional Korean jacket but exchanges the collar part in the traditional jackets with a long detachable metal brooch. She applies the comfortable, voluminous form of traditional skirts to her neoprene skirts. A significant aspect of Im’s reinterpretation of the past is the flexible layering of her clothes, which embraces variety and practicality in fashion that contemporary consumers seek out. Im’s creative process is very much aligned with contemporary marketplace and environmental concerns, as she explicitly pursues “zero-waste design.”

Jung Misun has extensively researched Korean women’s history and experience, both of the past and of today. Jung is interested in the timeless characteristics and unique traits of Korean women. She has expressed her observation that “Korean women are calm but dynamic, warm but progressive, flexible but strong.” Jung’s designs reassert that traditional Korean clothing expresses and embodies these essential attributes of Korean women. However, like Im Seonoc, Jung Misun acknowledges how impractical most traditional clothing fabrics are for a modern physically active lifestyle. She exchanges high-end materials such as silk used in clothing of the past with knitted jersey as her primary fabric, while maintaining the elegant silhouette of traditional garments.